Download the map (this is a temporary and low defined version map: we’re preparing a new version with all the trails and paths of the district…):  BORGIO VEREZZI trail map 2017 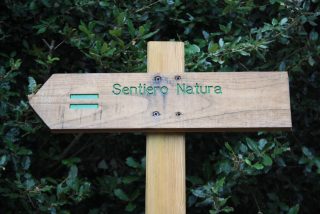 This is a theme trail which runs through different natural habitats of the area. It shows their main characteristics from geological, botanical and human points of view described on 15 descriptive panels. The trail starts at the level crossing by Borgio railway station. It takes Via Nazario Sauro and then Via della Cornice, through a stretch of perfumed Mediterranean flowers and then on to the old Verezzi Stone quarries, which are rich in fossils. As you proceed towards St Martin’s church you cross a typical Mediterranean maquis, in this case a holm-oak grove. Then you skirt the Phoenician windmill, where there is a wonderful view of the coast and then you go down to Crosa. Continue up to Piazza, then to Roccaro and the fork of the road known as “Carrubo del Buongiorno” (Good morning Carob). From here, walking down via Varicella towards Borgio and crossing the Battorezza stream, you will reach the main street and face the former aqueduct public park. Keep walking on the main street, turn on your right and, after crossing Piazza S. Pietro, through Via XX Settembre, you’ll arrive at Borgio Verezzi Showcaves. 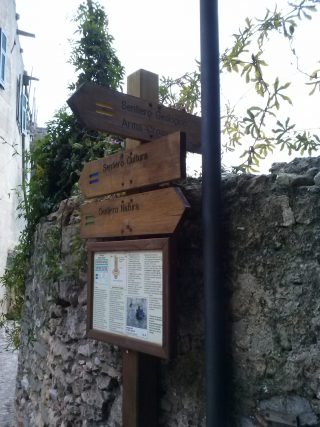 This trail passes through the most interesting cultural sites of our territory. Their main historical and architectural characteristics are described on 12 panels. From Crosa you walk uphill as far as St Martin’s church, then turn towards the sea, along the ridge. This takes you to a cliff facing the sea and from this point there is a wonderful horizon view from Gallinara Island, to the west, to Genoa, in the east, and even further on clear days. Continue to the caves area and towards the hamlets of Verezzi. you arrive at Poggio and then again at the fork of “Carrubo del Buongiorno”, an ancient meeting point for trade between the inhabitants of Borgio and Verezzi. From here the trail is the same as the “Nature Trail” described above, but in the opposite direction up to the departure point in Crosa.

This is a theme trail with six descriptive panels which allows you to travel back in time up to 300 million years ago. The trail shows the geological events that shaped Borgio Verezzi’s landscape. The path begins by Borgio Verezzi Showcaves, turns left along the asphalt road, following the ridge that leads to Bastia Tower, the ancient “Via delle Strinate”. Afterwards it turns right along “Via del Ritano”, crossing the Battorezza stream to reach Roccaro. This part of the trail crosses a time span of 300 to 35 million years ago tracing the genesis of the oldest rocks. Then from Roccaro you go up to Crosa, skirting the “Torre dei Sassetti”, where you can admire a 30 million-year-old fossil beach. Near the wash-house you turn left and climb to “Arma Crosa”, reaching the top of the plateau. Along this stretch you can see the typical and amazing Verezzi limestone, called “Pietra di Verezzi”. Proceed north-west along the ancient “Via del Castellaro” and turn back to Verezzi along a dirt road which skirts the Dolmen. After you reach St Martin’s church, go down to the dolina to the ancient quarry on the Orera plateau. From here you go back to the church and down along “Via della Chiappa”, by the “Cava del Colle” up to Poggio. Finally you go down to Borgio on the “Via dei Pasti” to come back to the departure point. This last part of the trail allows you to discover the relationship between the landscape and man. It shows the mysterious works of protohistoric cultures and the activities that helped the first industrial civilisations to flourish. 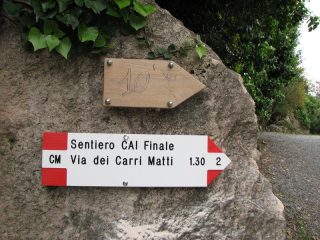 Departure and Arrival: Cava Pilino (path toward The Old Quarry or “Cava Vecchia”, near the Falesia 100 Corde and the MuMa Restaurant in Verezzi)

This is a theme trail, connected to the ancient ways traveled by the “carri matti” (meaning: “crazy carts”) which transported from the quarries to the sea  the blocks of the fine Verezzi stone. This path is a ring located in the Verezzi territory, starting from and arriving to the “Plinio” Quarry (also said “du Lago”) near the Old Quarry, intersecting the other paths (Geological, Nature and Culture). Signaled by arrows and signs with white and red colors. Realized by the Finale Ligure section of C.A.I.

This is a marvellous trail, starting from the little bridge near the Borgio Verezzi cemetery, and climbing up Monte Grosso until you reach Tovo S.Giacomo. The short version is a sort of ring: once you reach the quagliodromo (with a picnic zone usually used by hunters for the dog training), you can turn and go down through the same path. The long version instead goes on until Gorra and the Verezzi Churches of Borgata Crosa, and then comes back to Borgio. The trail is signaled in the first part by some arrows and signs, but the definitive path is still “in progress”. This trail is the protagonist of the “Ramate Walk” wich takes place every hear on May 1.

Realized by GS Ruota Libera in collaboration with the Municipality of Borgio Verezzi. 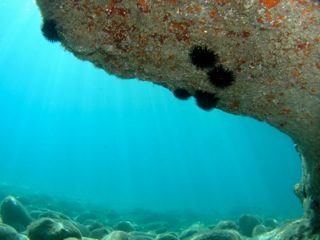 The starting point was an environmental workshop in 2007 attended by the secondary school classes of Borgio Verezzi in cooperation with a marine biologist, Dr. Andrea Molinari (Salto nel Blu), who identified some blue paths that means diving and explorating seabed paths in the coast stretch of Borgio Verezzi territory (from the small pier of the free beach close to the private beach named “ Bagni San Pietro” as far as Finale Ligure border).

The best evidence of the coast is the beach rock, a fossile beach (called “ciappa” or “secca”) that runs along the shore always washed by the waves.

The blue paths are two:

starts from the small pier of the free beach in front of Via Molino underpass close to “Bagni San Pietro” and gets to railroad crossing in Borgio Verezzi. Total length: 600 mt.

The diving path starts from the central pier facing the level crossing and gets to the parking of “Bagni La Bussola” private beach as far as the Finale Ligure border. 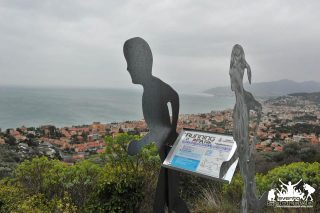 It’s a footpath and life path created by ADS Run Riviera Run and inaugurate on February 2016 with the cooperation of the Municipality. Along the Running Park Path (the first one in Liguria) every year in spring takes place a race called “Vertical Verezzi” (5,85 km. for runners from Piazza Magnolie to Piazza S. Agostino and 4 km. for walkers who climb to Verezzi through the geological trail). 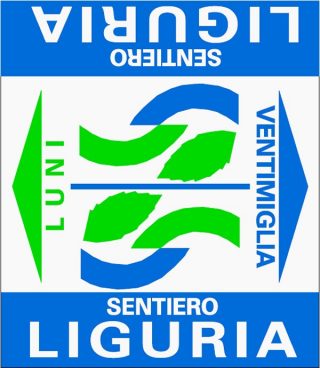 This trail was born from the “Active Tourism” project and its hiking itinerary (for walkers) that is shared in several parts along the Ligurian Riviera, from Luni to Ventimiglia.  In particular, route n. 20 concerns the territory from Finalborgo to Boissano and includes the Verezzi and Borgio territory. The path is marked with light blue and light green small indications and trail signs.  After two years of project realization, in 2017 “Sentiero Liguria” was officially presented and promoted by the Region. Learn more: Sentiero Liguria. 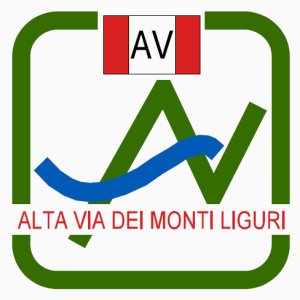 This is a 422 Km path that runs from Maritime Alps to Apennines and it’s really perfect for hikers all year long.  Several trails connect the two ends of the Riviera through wonderful views and scenery of coast and inland between sea and sky. The red-white-red signpost with the AV acronym is all along the whole trail from where you can admire the Island of Corsica and Gorgona, Monviso and Mount Rosa.

The Association “Ospitalità Alta Via dei Monti Liguri” gives an informations service by phone calls (Altaviainfoh.24) to its customers 24 h. a day, (also in English and French: ph. +39.3381629347).

It’s an itinerary from Santiago de Compostela to Rome through the streets of Liguria….348 km. on foot with 12 stops, one of them also in Borgio Verezzi.

Discover the stops in our territory (Route n.5  Loano-Finalborgo-Noli) www.viadellacosta.it/le-tappe/05-loano-noli/ 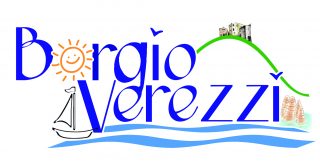